For a quick summary on our visit scroll to the very bottom of the post.

One of the great things about DFW being the hub of American Airlines comes in the form of an Admirals club in each terminal. We’ve covered Terminal A, Terminal B, and Terminal D, in our previous posts for anyone curious about those. However, for anyone looking for the Terminal C Admirals club it can be found across from gate C20.

The entrance is hard to miss with signs on both sides of the terminal pointing towards the club. There is a large white sign at the entrance with the posted hours and visible glass elevators. And in case it’s too difficult to read on the photo above, the hours for the DFW Terminal C Admirals Club are 4:00 a.m. to 10:15 p.m. daily.

After checking in you’ll be met with a choice of taking one of the two elevators or a flight of stairs to reach the club level, which sits one floor above the concourse. The elevators open directly in front of the main help desk so this would be the best place to ask any questions related to an upcoming flight, voice concerns, or request an upgrade. Then from this point the lounge branches out in two directions with stairs on either side–the bar being located up the stairs and to the right.

As is typical of the lounges at DFW the Terminal C Admirals club offers up plenty of seating options. The lounge is very long with multiple sections, some of which are better suited to conversing with your travel partner while other areas are better for watching television or enjoying a complimentary beverage. 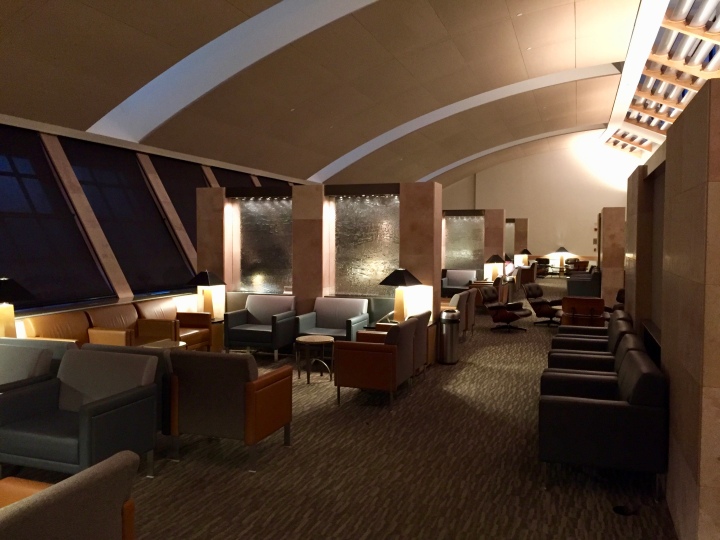 Then for anyone looking for an area that would be a little quieter than the rest it would be a good idea to retreat to the back wall of the Admirals Club, opposite from the bar area. 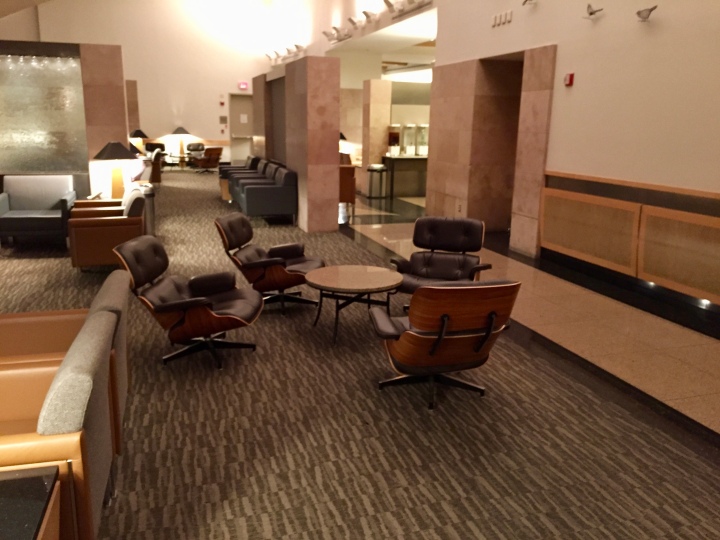 In addition to being a quieter spot, this area of the Admirals Club also has less foot traffic since people generally wouldn’t be walking through here to get to the bar or another area of the club.

Seating options along the main pathway adjacent to the bar area

Then the area right on the other side of the wall from the bar has additional seating options but this is a higher traffic area with everyone going to and from the bar. But in the grand scheme of things it’s still a calm sanctuary away from the hustle and bustle of the concourse with easy access to the complimentary snacks and drinks.

Additionally, the bar area has multiple seating options with tables that we’ll fully cover in one of the lower sections. As well as another alcove near the windows but this spot doesn’t afford any views of the television like the rest of the bar area.

I’ve been to some lounges where the entire design used the bar as a focal point. While I would say that is not the case in the Terminal C Admirals Club it’s certainly not an eye sore either. It has a nice illuminated frosted back splash that blends well with the area.

The bar also has seats at the counter but I personally don’t find that very appealing since the only television in the bar area — albeit a large one — is mounted to the wall directly behind the bar. But since the lounge does have wi-fi with streaming speeds it is easy enough to sit at the bar with an iPad or laptop to work.

As is the case in all Admirals Clubs they offer well spirits, house wine, and domestic beer complimentary. Then they have premium liquor, beer, and wine that can either be purchased  or ordered with the use of a premium drink coupon provided to anyone on a qualifying international itinerary. These would generally be people flying in First or Business class on American or a Oneworld carrier internationally to most destinations other than Canada or Mexico. Or anyone with Platinum status (Oneworld Sapphire) or higher traveling on a similar international itinerary. 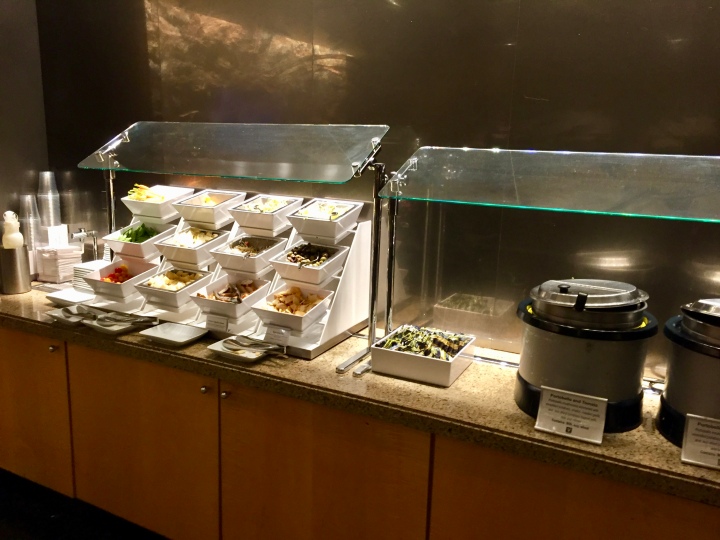 Selection of snacks at the DFW Terminal C Admirals Club

When it comes to food the lounge has two soup options, a selection of veggies, cheese cubes, humus with pita chips, and for dessert, brownies or cookies. Additionally, there is a fancy coffee machine that can also make hot chocolate and provide hot water for tea. And if you happen to be looking for more than a snack they also have a menu with items such as sandwiches and salads available for purchase.

Overall you won’t find yourself going hungry while visiting this particular lounge but know that it won’t offer a full food selection or meal buffet before the flight.

During my visit here I had a couple inquires to make about my upcoming flight and the lounge staff at the front desk were very friendly and accommodating. I found the lounge to be a relaxing place to wait for my flight and the Wi-Fi speeds were fast enough for me to stream a football game on FS1 from my iPad.

The television in the bar area was playing the Astros playoff game and I thought having a big television with plenty of seating was an excellent plus for this lounge.

Shower stalls are located near the front of the Admirals Club

I also noticed this lounge had two separate shower rooms but I didn’t have any need to use them so I cannot comment on their features. But it is nice that they have the shower option in a non-international terminal.

In addition to the large television in the bar area, speedy Wi-Fi, and showers, the lounge also has a kids area, business center with cubes, and conference rooms. It is also nice that they have two bathrooms, one on each side of the lounge. It can get annoying at times when a large lounge only has one bathroom turns into a waiting game so its nice to see that would be unlikely to happen while visiting his lounge

How can you get in the Terminal C Admirals Club?

Overall it’s a solid lounge with quick Wi-Fi, plenty of seating, two bathrooms, and a variety of snack options. While it won’t compare to some of the lounges overseas that people might be visiting on the first or second leg of their international trips it serves its purpose well. It’s a conveniently located lounge that provides the amenities necessary to escape from the concourse while waiting on a domestic flight. But if you come in expecting a lounge like you would visit with Cathay Pacific or Qantas then you will be disappointed. However, American is hard at work building their new Flagship Lounges and these should be the addition American needs to give their customers the premium international lounge feel that can be found with a lot of other Oneworld partners and leave the Admirals Clubs as large network of domestic lounges.

Enjoying a gorgeous night in Chicago for the first day of fall!
Being on the water gives San Francisco a completely different perspective. Make sure you plan time if you find yourself there to enjoy the calming effects and cruise under the Golden Gate Bridge at sunset!
Who else loves a great meal before a flight?👇
Happy 4th! We took this amazing shot on our sunset wine tasting cruise on the aptly named wine therapy boat around the San Francisco Bay!
You can’t miss the sea lions at Pier 39! It was a highlight of our recent trip to San Francisco!
AA Boeing 787 getting ready for take off during golden hour at Chicago O’Hare