It feels like the Admirals Club in Terminal A of the DFW airport has been under construction for quite sometime now. I don’t know about everyone else, but I have been receiving the reminder emails before every trip, and thus avoiding the Terminal A lounge in favor of the others. However, on a recent early morning flight I decided it was finally time to check out the progress and I was pleasantly surprised with how things appeared to be coming along. I snapped some pictures of the updates, but since the renovations were still taking place and it was so early in the morning, I didn’t attempt a comprehensive review.

The updated section of the Admirals Club is on the left after exiting the elevators. And from what I could tell It looks like this area shown above was set up to be a temporary front desk for when they block off the rest of the old lounge section to work on the remainder of the renovations.

Further around the corner there is a nice open seating area with new chairs, light fixtures, and large pictures on the wall. I was pleasantly surprised by the decor and found the seats to be comfortable.

Along the back wall of the lounge I noticed a long counter with multiple chairs and evenly spaced outlets, which would be perfect for working on a laptop. 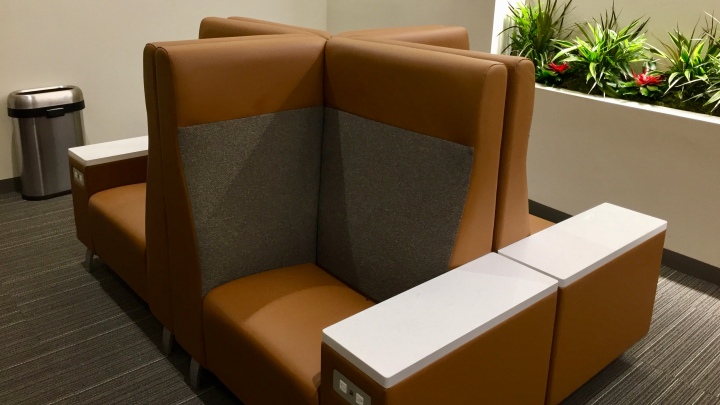 And right next to this counter was a very unique “quad-pod”, complete with outlets and armrests — it’s nice to see some new furniture designs being added in.

One thing that really stood out was the abundance of places to charge electronics. Not only did they have outlets everywhere, but the lamps even had USB ports!

Further along in the lounge is where the bar and food area could be found. The area has a series of smaller tables with chairs, a long table with plenty of chairs, and a sitting area with flat screen tv. This area also kept to the theme of many outlets and had a departure board hanging along the wall. 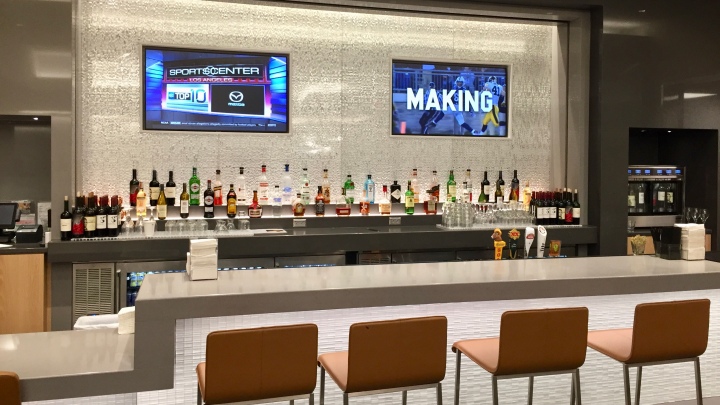 Then right next to this spot was the bar, which I thought looked great — it was very bright and open with two flat screen televisions built into the back splash. Since it was before 7 a.m., the time when they start serving drinks, the area didn’t have too much going on. 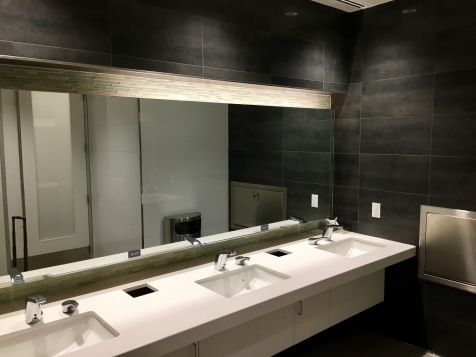 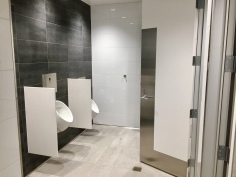 Then before heading out to catch my flight I made a quick stop in the bathroom and I was happy to see the new sleek design — a welcome improvement. Overall I would say the stop was a success and everyone looked to be enjoying themselves! Well.. at least as much as one can be enjoying themselves at 6 a.m. 😉

I’m excited to see what the finished product looks like and was impressed with the way everything was coming together. It seems to be a nice setup, sporting plenty of outlets for charging electronics — and the foundation to be a nice large Admirals Club once it is complete. It looks like they still have half of the club to complete, so it still could be a while before everything is finished, but at least in the meantime it is a usable lounge. And if you need any reminders on what the old Admirals Club in Terminal A used to look like, for comparison purposes, you can check out our older post here. The finished product will certainly be a nice spot to relax before a flight and hopefully the lounges in the other terminals will follow soon.

It’s officially spring in D.C.!
Happy St. Patrick’s Day!! 🍀
Looking forward to a 2022 full of adventures and sunsets with family and friends! Cheers! 🥂
Scored a front row seat to see this Korean Airlines Boeing 777 taxing at Chicago ORD airport.
BOSTON has been a lot of things to us during our relationship despite neither of us having ever lived there. It was our launch point for our first big trip together, and on an A380 nonetheless. A rendezvous point for us when we were doing long distance and Ryan was living in Providence. My last trip before lockdown. And our most recent weekend trip! It was great to be back and build more memories.
Champagne and planes three ways.