Living in the DFW metroplex near the headquarters of American Airlines generally means we can fly direct to a multitude of locations around the world. However, when we came across a deal out of Boston on British Airways A380 in World Traveller Plus+, it was too good to pass up. And as luck would have it they opened their brand new Boston British Airways Terraces Lounge just a couple of months before our trip. 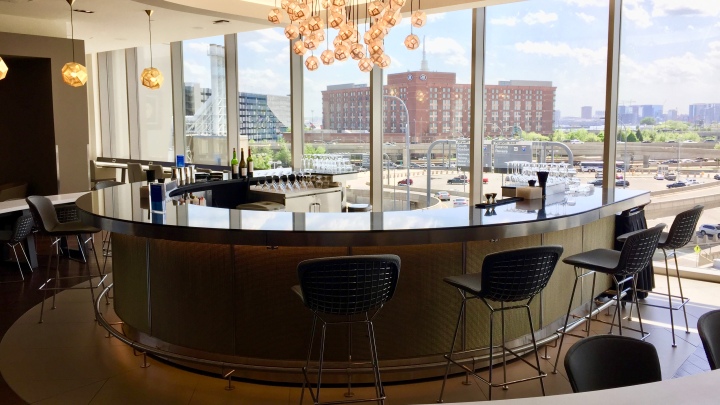 Since we are American Airlines Platinum members, or Oneworld Sapphire, we were given complimentary access to the British Airways lounge before our flight. It is important to note that lounge access is not included with the World Traveller Plus+ fare unless you are a Oneworld Sapphire or Emerald member. For a quick way to determine if your airline status matches to either Sapphire or Emerald you can visit the Oneworld status tier match website here.

Since we already did a separate review on the British Airways Terraces Lounge I won’t go into too much detail over it. But one of the neat features was that when it came time for boarding we were able to board directly from the lounge through the doors above.

And we had a great view of the Airbus A380 aircraft sitting at the gate the entire time leading up to our departure.

Our World Traveller Plus+ seats were on the upper deck, 64J & 64K, and as soon as we boarded the plane there was really no way of telling there was an entire level of passengers below us. The true size of the aircraft was impressive. The A380 has the newer World Traveller Plus+ seat with the built-in head rest and double wide armrest. This is certainly a big improvement over their previous World Traveller Plus+ seats. Once we made ourselves comfortable it felt similar to domestic first class within the United States, but with the seat width being more in line with a normal economy seat at 18.5 inches wide. The seats are also noticeably thinner than the older ones and I have heard about people complaining that they were too hard for them. We personally had no issues with them and found the seat to be quite comfortable, but our flight was a quick jump over the pond at just under 6 hours in the air, so maybe if I had spent another 6 hours in the seat I would of had more qualms with it.

The other nice part of sitting on the second deck of the A380 is the storage compartment under the windows for smaller personal items. We used it for our headphones and iPads so we could put our carry-on bags in the overhead bin and have additional leg room under our seats. While this storage compartment is very convenient it can make things rather difficult for anyone who likes the window seat for resting their head on the side of the plane while sleeping.

After getting situated the flight attendants came through the cabin offering everyone a choice of water or juice before we departed. For some reason they were not allowed to serve champagne while on the ground in the United States, so rather than toasting to the beginning of our adventure we asked for the water.

Shortly after finishing our water they came back through the cabin and handed out the World Traveller Plus+ dinner menu for our 7:20 pm flight across the Atlantic. I found the menu to be a nice touch for the premium economy cabin. The World Traveller Plus+ menu includes one item to choose from the business class menu, such as the seared fillet, and this so happened to be the item we both ordered for dinner. 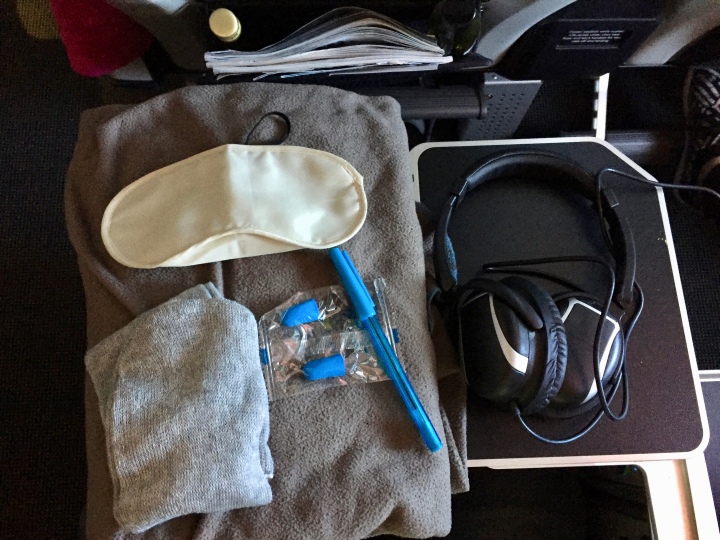 The World Traveller Plus+ seats also come with a small amenity kit. It certainly isn’t on par with anything you would find in business or first class but it still included an eye mask, socks, ear plugs, a pen, a blanket, toothbrush, and a set of generic British Airways noise cancelling headphones. Then each seat also had its own small back pillow. While it wasn’t much, these items certainly made sleeping on the flight a little easier.

The seats, which were set up in a 2x3x2 configuration on this A380, had very good leg room and a footrest that dropped down from the seat in front. I personally didn’t find the footrest to be all that helpful and preferred placing my feet under the seat in front of me. I tried to test out the in-flight entertainment to get a movie going before take off but I found that whole set up to be rather disappointing. From what I could tell they had a great selection of movies and the screen was a decent size, but my sound didn’t work properly so I couldn’t actually listen to the movie. Nobody else in the cabin seemed to have this issue, and the flight attendants couldn’t figure out the problem, so I went without for the flight. Instead I used the screen to constantly track our location. This brings up a really important flight tip – if you like to watch movies or shows on your flight then its never a bad idea to bring a few of your own for circumstances like this. This is something that is really easy now that Netflix and other streaming platforms allow users to download shows to watch offline.

Soon after takeoff they came through the cabin to offer drinks. I went with the Johnny Walker Red Label and this came with a small can of Sprite. It made for a rather enjoyable start to the flight and I couldn’t wait for the adventures to come.

They also offered everyone their own mini bottle of wine to enjoy with dinner, a choice of either red or white. 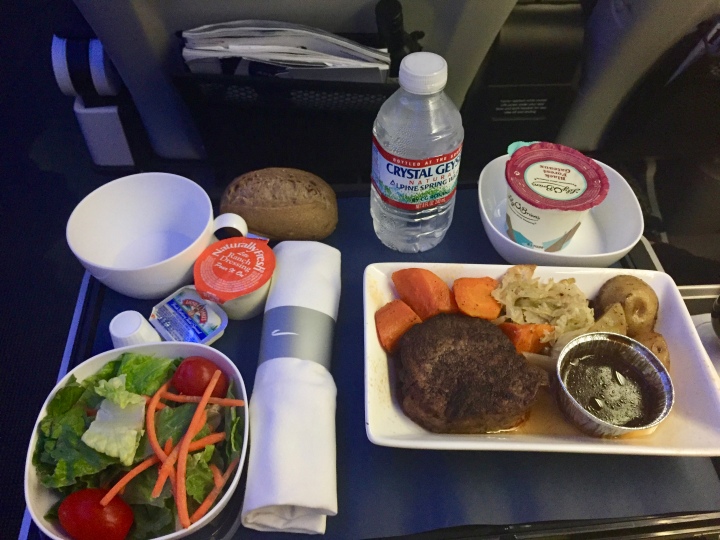 Dinner arrived on a tray with the seared fillet, salad, dressing, butter, bread, a bottle of water, and the chocolate Gateau. Then shortly after they came through and offered a selection of coffee or tea, but since I wanted to get some shut-eye after dinner I passed. When judging airplane food I like to remember that we are 5 miles in the air and moving over 500 mph. So given that fact I was extremely satisfied with my dinner and it was certainly a step above any meal I have ever had in long haul economy, giving premium economy another check mark over economy in my book. 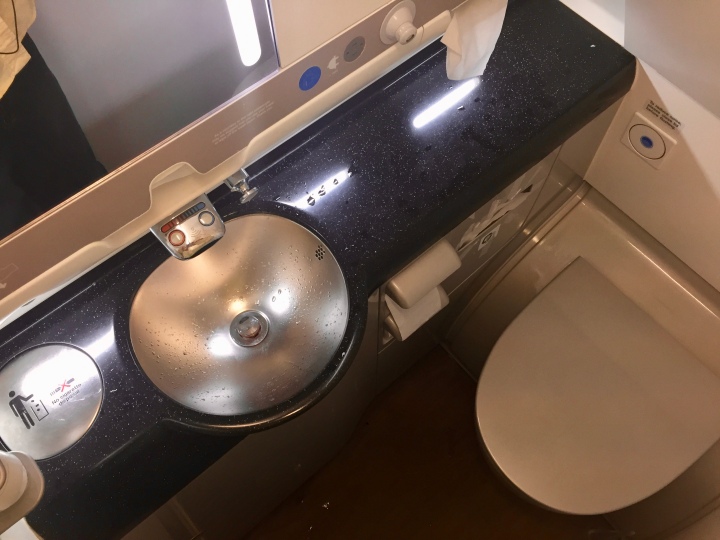 After dinner I hit the bathroom to brush my teeth before trying to get some sleep. I was a little disappointed in the size of the bathroom, as it was a little tight, so it might take a little extra effort for anyone intending to change into sweat pants during the flight. The World Traveller Plus+ cabin has two bathrooms available for use and if those are full there are also two farther back in the economy cabin. After brushing my teeth I quickly fell asleep and woke up with just over an hour left in the flight. The seats offered an excellent recline pitch that was great for sleeping but the downfall to this was how far the seats in front of us reclined, almost feeling as if they were in our laps. If everyone is sleeping then it is a non issue, and thankfully the people in front of us were nice enough to only fully recline while they were sleeping. But the biggest downfalls to the fully reclined seats would have to be the screen being pretty much in your chest, and it being difficult for the person in the window to get out without hitting the sit in front of them. 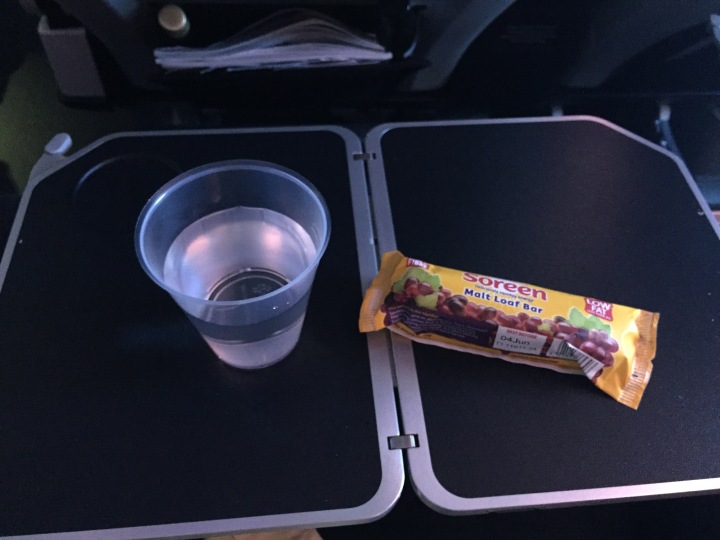 Before landing they served “breakfast”, which they labeled as a light refreshment that came in the form of a Soreen malt loaf bar and a choice of juice, coffee, tea, or water. This was a little disappointing but it did the job of holding us over until we could get breakfast after arriving.

After a mostly smooth flight we ended up landing slightly early and we arrived at Terminal 5 with plenty of time to make our connecting flight, a major plus in my book.

World Traveller Plus+ definitely has its place on British Airways and I enjoyed the flight overall. It certainly would’ve been nice if the in-flight entertainment screen worked, but given the length of the flight it ended up working out–on a flight longer than Boston to London it would have been a bigger issue. This flight is short enough that premium economy is the perfect option if you find the right price. I personally wouldn’t say its worth paying twice as much as economy, but at around 50% more its worth considering. It also improves the chances of upgrading to business class using Avios, so that part doesn’t hurt either. Unless you are traveling for work and need to be fresh upon landing, I think premium economy is perfect for this length of flight, especially if you have status to get in the lounge beforehand, since we only had about three hours to sleep after the dinner service. After this experience I wouldn’t hesitate to try premium economy on another airline if the opportunity arises in the future. If anyone has flown the new British Airways World Traveller Plus+, or has questions about the experience, we would love to hear your thoughts below.

Amazing flight on @americanair to Honolulu and it only got better when we pulled into the gate next to this Korean Air 747-8. Always a treat to see the queen of the skies!
Enjoying a gorgeous night in Chicago for the first day of fall!
Being on the water gives San Francisco a completely different perspective. Make sure you plan time if you find yourself there to enjoy the calming effects and cruise under the Golden Gate Bridge at sunset!
Who else loves a great meal before a flight?👇
Happy 4th! We took this amazing shot on our sunset wine tasting cruise on the aptly named wine therapy boat around the San Francisco Bay!
You can’t miss the sea lions at Pier 39! It was a highlight of our recent trip to San Francisco!